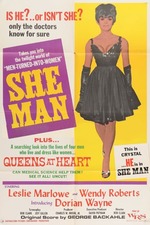 She-Man: A Story of Fixation

It's very...interesting, but very slow. For such a short-ish film it really stretches out its runtime. Still, it's a fascinating little sensationalist picture, asserting up-front that it is informed purely by the factual experiences of its subjects and then immediately launching into a plotline of blackmail, extortion, and forced servitude. I don't know about you all, personally, but I wasn't able to receive my hormones until the specialist got some dirt on what I did in the summer of '11. Sure took him long enough.

Regardless of its shortcomings, it's always rewarding in some way to see transsexuals/vestities on-screen at all, even one so severely limited by a pathological medical gaze. And scoring it all with catchy bongo beats was certainly a choice, a choice that confounded me in a very enjoyable way. The blackmailing scene is probably the highlight of She-Man's craftiness, with opaque darkness all but swallowing tiny, vulnerable faces and deft, devilish fingers. Those fingers belong, of course, to Dominita, whose commanding screen presence and energy is almost but not quite enough to make up for the lethargy of literally everyone else.

Anyway, this being his debut feature only reinforces my belief that Bob Clark is one of the weirdest auteurs in film history. His entire filmography is the nuttiest fucking grab bag. How the fuck did the man who made this also make Baby Geniuses.