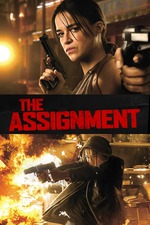 Complete junk, shallow and incoherent, burdened by an insultingly unnecessary duo of framing devices that remove all tension and suspense from the story, dragged down by characters who do not ever act or speak for a single instant like a normal human being, blemished by laughably bad "man" make-up on Michelle Rodriguez in its first act, stunted by the hilarious idea that such a prolific and elusive hitman exclusively kills his targets by walking up as close as possible to them and shooting them point-blank in the middle of public places, poisoned by Rodriguez's non-stop gravelly grumbling and Sigourney Weaver's intolerably smug do-nothing Lecter-like antagonist, bewildering in its stylistic choices and transitions, bloodless and bland in its action, and simply reprehensible as a premise—yet unfortunately, I had the biggest and dumbest smile on my face for almost all of this dung heap so I cannot say that I hate it as much as a reasonable person, especially a trans person, should, and if I was having a wily night I'd probably watch it again in a heartbeat just to cackle at Frank Kitchen's ginormous pecs with nipples in the wrong place.