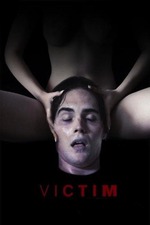 Victim is a victim of weird, awkward performances and lots of ideas that are deployed for "horror" that aren't thought through or realistic at all to any of the character's motivations. For example, the least surprising thing in the film is that our mad doctor's prisoner gets feverish and infected after his surgeries because the doctor's idea of "postoperative care" is just slapping on some bandages and throwing his prisoner back onto the filthy mattress in the same musty, unclean, unkempt cellar that he's performing the surgeries themselves in. Talk about a poor bedside manner! Furthermore, every twist and shock in this film is telegraphed way too transparently and way too early, defusing all of the mystery of "why is he doing this" or all of the tension of "the detective is getting closer."

I joked earlier, but by beating The Skin I Live In, Victim does genuinely deserve credit for being the first of the last decade's forced feminization horror films, a timely and prurient fixation spurred on by the 2000's gradual increase in mainstream trans visibility. These films portray forced feminization as the ultimate degradation, not just a physically torturous transformation but a humiliating brainwash. It's a fear response to the idea that since these operations and procedures are possible, you—read, a cishet male—could have them done to you, and god, wouldn't that be awful? To be mutilated like that? Turned into a girl!? It's the horror of Frankenstein, the modern difference being that the parts from which he builds his monster are no longer unliving flesh but real and still-intact men. Its final act is nothing more than the apex of such a horrific transformation: the man turned into a woman being on the receiving end of what men inflict upon women.

It's worth noting that this form of cisgender hysteria ("Cisteria?" Hey, anyone wanna start a band?) is simply the fictionalized counterpart of the very real, very actual horror that trans people with dysphoria who are not allowed or able to transition are forced to live with. It is similarly the reality of intersex people who, historically, have been forced to live as one sex or the other based on the best judgement of whoever made that assignment at birth. The real, lived horror of having gender and a gendered body, that is not yours and that you are not, forced upon you can be, to put it mildly, extreme.

Yet, for the same reason that the lack of agency inflicted by forced feminization can be horrifying to those who don't want it, it can also be interesting, titillating, or arousing to those who do, whether fetishistically or whole-heartedly, cis or trans. The idea of having feminization "forced" upon you obviously takes away your choice in the matter, and well, if it can't be helped, then it's okay to be transformed and sissified as such. This premise has had a long, long life in pornography already, and this film even had a hypnosis track playing over the prisoner's cell. It's just another disappointment that in putting all their chips in on horror and shock (they didn't have very many chips), they couldn't even dabble in the complex emotions that forced feminization engenders (ha). Not that I necessarily would have wanted this film to, of course. I mean, have you seen this film? If you haven't, I don't recommend it. That's why I rated it one star, and am writing this negative review which you have just finished reading.