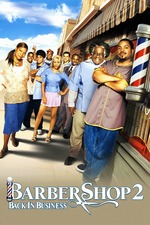 Barbershop 2: Back in Business

I’m gonna keep this one quick.

I am fairly sure this movie was edited by two monkeys in a trenchcoat. There were too many moments where I couldn’t focus on what people were saying because the transition was horrible, or people teleported across the room because they chose the wrong shot to input. It was super distracting.

The characters were meh. Most were huge tropes and I really only found one of them genuinely interesting. None of them are bad, just sorta bland. The acting was fine, no-one gave a great performance, but no-one really gave a bad one either.

As far as “nothing” comedy’s go this isn’t a terrible one. It’s got some laughs, and it’s got a really wholesome happy vibe to it. It doesn’t have a whole lot going on, but that’s not really what you look for in this type of film.
Objectively it probably deserves a half star or so higher, but I just don’t enjoy this type of movie all to much. It’s fully down to personal preference. If you like “nothing” comedy’s, I’d definitely recommend this.