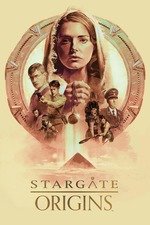 Background: Origins was a web series released in 10 minute episodes. This movie takes all those episodes and stitches them together. This story follows Catherine Langford, who we've seen in the original Stargate, along with her father, at the Giza site in 1928 when she was a young girl. Ten years later, Catherine and her father are still investigating the gate, but have no idea what it is or what it does. Then the Nazis come and they all go through the gate and... well, if you've seen Stargate before, you know where it's going.

I've followed the Stargate franchise from the first movie to the SG-1 TV series, followed by Atlantis and Universe. Origins is a nice trip down memory lane, but you wonder if this trip is really necessary. We meet a young Kasuf (yes, he's in the original movie too) and much of what we've seen in the original movie is redone here. The "seventh symbol" scene that explains why Daniel Jackson finds some destroyed writing decades later doesn't feel that necessary. By the time we get to the end, the "reset button" has been hit, making sure what happened here doesn't contradict future events.

Origins has its heart in the right place, but the execution is just so-so. Stargate is a good franchise. 2024 will mark the the 30th anniversary of the Stargate film. Hopefully, we'll see something really special at that time.