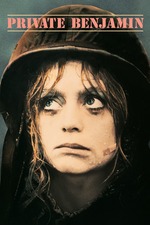 The first half is damned good. And seems to be where the majority of the actual content is that went into the TV series. It's what "Private Benjamin" is known for.

"Private Benjamin" is an early entry among those comedies where an outsider joins a tough, military organization (see also: Stripes (81) and the original Police Academy (84)), thumbs their nose at authority, but actually excels once they put their mind to it, just to spite those superiors.

Only problem is, "Private Benjamin" is a 'nice' movie. Judy Benjamin is too sweet. Her struggle to fit in is brief. And once she does, she shows off some unexpectedly impressive tactics during a red/blue wargame simulation.

This pisses off Captain Lewis who then VERY drunkenly interrupts a celebration at the women's barracks.

The ladies (who are all friends now) retaliate by filling her shower-head with some blue ink, which drenches their Captain in azure.

This is about as far as the 'revenge' gets, and more or less completes the first half of the film.

The second half, I was desperately trying to stay awake. There's a subplot about Benjamin being the victim of attempted rape by a superior (as all comedies do), and something happens... I guess she ends up in Europe, leaving the army? She sleeps with some French doctor who's a real asshole and potentially a "commie".

Look, I tuned out. It was like an entirely different movie. What the hell happened?

(Special shout out to the excellent Eileen Brennan who plays Captain Lewis, and also makes the jump to the series. She would have made an outstanding Captain Janeway for the 1980s.)