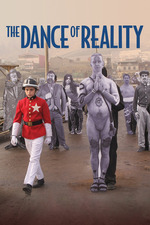 In other words, it's a Jodorowsky movie.

Deemed a "magical autobiography", Jodorowsky muses on his childhood in Tocopilla, a Chilean port and mining town. The son of Ukranian immigrants, his alienation is acute, and not aided a bit by his father, a self-loathing Jew whose idol and role model is Stalin.

In fact, Jodorowsky leaves his own story for a great swath of the movie to give this man a learning voyage, a renewal and recreation of self that his father never actually had, but which allows the filmmaker to make peace with him and his life by film's end.

In many ways, this serves as a Jodorowsky's Greatest Hits movie, with callbacks to everything from Fando y Lis to Santa Sangre. Original imagery abounds as well, and I especially appreciate that Jodorowksy's mother, who in real life dreamed of being an opera singer, literally sings all her lines.

I'm not sure if a newcomer to Jodorowsky's work should consider this as an entry point (though it is one of his more accessible films) or if it better serves as a coda to a remarkable career.

Jodorowsky, as ever, making us ask questions and ponder our own answers.