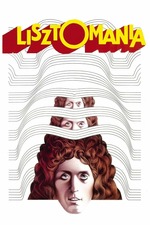 There's certainly a touch of the personal hidden deep within Ken Russell's Lisztomania. There's plenty of themes of guilt, creating art, religion... all stuff that interests him, and here it seems at least slightly self-reflexive. Granted, it's coated with an even crazier version of Russell's signature bombast while simultaneously feeling tied down to the whims of character- I think I ultimately prefer Tommy as far as these '75 Daltrey-starring Rock-n-Russell fables go, because at least that doesn't even try to care about its characters. There's a ton of genuine sincerity here, and I'm not sure all of it's able to land past the 10-foot-erections and Nazi vampires. Of course, it's still a rock opera biopic with 10-foot-erections and Nazi vampires. Even if the tunes aren't always great (save for the absolutely stupendous and gloriously bawdy opening), it's fun for sure.