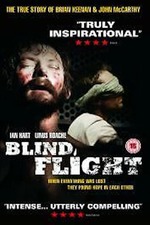 Despite being interested, thanks to Robert Fisk’s Pity the Nation, in the events that transpired in Lebanon during the eighties, Blind Flight is one of those films that you can’t help but question the value of. It is all executed very well: the performances are superb, the camerawork and lighting effective, and the script does a surprisingly good job of extracting a certain structure from what is basically two men in a room for ninety minutes (though the score is perhaps a little heavy-handed and reliant on sustained ominous bass-notes). But, ultimately, what’s the point? It’s very interesting to see how the two men interacted with each other, but one imagines that their own written accounts (both of which are drawn on by this movie – both Keenan and McCarthy cooperated with the making) provide a lot more detail and a greater insight into how it feels to be in a situation like that. If the point was to show the durability of the human spirit, well, blah blah blah. I found the lack of detail about the situation at the time in Lebanon disappointing, though it was probably the right choice. Where it was interesting and perhaps slightly unexpected was in the relationships shown between the two men and their captors, and frankly I would have liked to have seen more of that – the power struggles and the way the situation affects all concerned was very interesting.

Still, maybe this is petty-minded. If it provides catharsis for either or both men, and gives the world a little insight into this kind of thing, without pandering to Islamophobia or crass simplifications of the Middle Eastern situation (the early dialogues between them on the subject of politics and intervention are very interesting) then maybe that’s good enough. Unlike the films in last year’s festival that set me thinking about the relationship between films and reality, this cannot be accused of exploiting Keenan and McCarthy – or, if it does, they are fully complicit in it. And sentimentality is resolutely avoided, right up until the strangely crass final words (in voiceover: “It hasn’t all been a bundle of laughs, but I wouldn’t have missed it for the world.” Seriously?!). [written 8 Oct 2003]