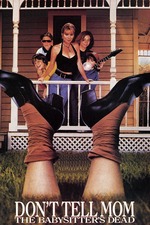 Sue is the oldest of five siblings. Their mother is going on summer vacation for a few weeks and she has a bunch of plans with her newfound freedom....that is until the morning of her mother's departure when the babysitter shows up. An old school woman who could easily be mistaken for a drill sergeant if not for the dress and old lady shoes. Just when it seems like summer is ruined the babysitter dies. Telling their mother would ruin everything so they drop off the body outside of a mortuary but don't realize that she had all of their house allowance money on her. Now Sue must get a job and support the family if she wants any chance at freedom and fun in the sun.

Released in 1991, "Don't Tell Mom the Babysitter's Dead" is an overload of the late 80s / early 90s from the opening theme up to and including the star Christina Applegate, dead smack in the middle of her stint as Kelly Bundy on the legendary TV series "Married With Children." Clothes straight out of a Madonna music video, acid washed jeans, leather jackets, box shaped cars, tremendous earrings and big hair are on full display. We also get Danielle Harris a few years older than she was in Halloween 4 and she's great as the tough little sister. The rest of the cast is all standard fare for these types of films at the time but they fill the roles perfectly. They were a dime a dozen, but that doesn't mean they have to stink. This one certainly does not.

After two months of horror and western films it was nice to take a break with a cool nostalgic family comedy. Well...as family friendly as celebrating and then forgetting the death of an old woman can be. This was an easy review as well. Don't Tell Mom the Babysitters Dead serves it's purpose well, an hour and forty minutes of nostalgic unrealistic family fun. Check it out.