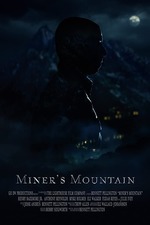 Roseanne Barnes claims she was hearing things outside of her house. When she investigated she heard strange grunting noises and saw yellow eyes. She called the police and Officer Jefferies responds to her call, finds nothing and then falls asleep for an hour in his squad car. When he wakes up Roseanne has been mutilated and his windshield is broken. Fast forward a few decades and he's now Sheriff Jefferies. A new homicide has occurred with striking similarities to that unsolved case from years ago and two SBI agents think the sheriff knows more than he claims.

It's been awhile since the last time but I like to sprinkle in a review of a short film from YouTube from time to time, not only to get myself ready for a day of features but to hopefully draw some eyeballs to films usually created by small teams that are worthy of attention. Miner's Mountain is a shining example of one of those films. The plot is setting up a story that has potential to be great. The backstory is extremely interesting and could go a few different routes, all of which I could foresee myself enjoying.

The cinematography and production value go above and beyond what you'd expect from an indy short. I dare say they're excellent. The makeup and FX, especially those used on the creatures isn't flawless but it's pretty damn impressive considering it's a short film that I assume only had a micro budget. Henry Bazemore Jr.'s portrayal of Sheriff Jefferies looks incredibly genuine and I wouldn't be surprised if he becomes an actor in feature length films if that's what is wishes to do. Talent like that needs to be on display.

A trailer just dropped for Miner's Mountain part 2 and not only am I interested but I'm invested. I can't wait to see what's to come from the mind of Bennett Pellington. If you have 17 minutes to spare and want to check out this indy gem here's the link to the film on YouTube. I highly recommend it.