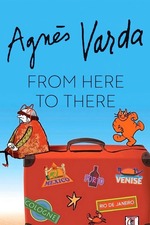 Agnès Varda: From Here to There

235 minutes of Varda delving and essaying her way through various travels, visits with artists, curious interactions with people and acts of creation; if any of her guided tours of the universe ever appealed to you, this is the bounty you seek. Each of the five 45-minute episodes -- they share a quick introductory sequence, but otherwise are clearly an arbitrary breaking up of a larger whole -- serves its purpose in that it leaves you feeling as though you too have traveled to unlikely places with an atypically inquisitive eye. There are certain highlights that really stand out, like the visit to Chris Marker's eccentric cord-nest of a studio, a spontaneous interview with the widow of a California man who was killed in gang-related crossfire, or the clay performance piece by Miquel Barceló, and especially the wonderful visit to the locations and some of the actors of Varda's 1955 directorial debut La Pointe Courte (which I may have enjoyed more than the movie itself!), but virtually every sequence is interesting and surprising in some fashion, and of course beautifully shot even during the moments when she seems to be filming on a smartphone. Art and life never seem to intertwine so beautifully as they do in Varda's documentaries. The only problem with this series is that, especially given its length, it ends extremely abruptly... but maybe that adds to the feeling that it's just a scrapbook that could potentially go on forever, like the fade on the vinyl version of "Marquee Moon," and we can convince ourselves that another episode is coming, perhaps one we'll create ourselves. The show (much like The Gleaners and I in particular) certainly makes you want to approach your day to day life differently. And for all the talk of "Auntie Agnes" and her kind-hearted, gentle auteurism, she confronts class division and injustice in a more casual, direct and unsentimental fashion in her work than almost any other filmmaker.