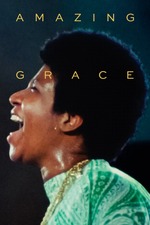 Sydney Pollack's unfinished documentary about the recording of the eponymous album, the best selling gospel record of all time, is both a musical powerhouse and a cinematic joy, I suspect even if you don't have a certain automatic awe for something shot on grainy, spectacularly colorful 16mm film, but it doesn't hurt. Perhaps the best testament to this film's power is that it made me seriously contemplate the idea of faith, what it is and what it means, in a way I very seldom have. I started to think of how Aretha Franklin's performance feels like humanity in peak form, in terms of raw emotion and elegant artistry; this isn't unusual for her, but it's amplified in the context of the Church, the world that spawned her as no other could have. Then I thought of the presence in the back of the room of Mick Jagger and Charlie Watts, and about the all-white camera crew, and how there's a perspective from which it can all seem so condescending: the banal camera catching all this like some anthropological exhibit. For his part, Pollack didn't know what he was doing, which is why this remained unreleased for decades -- astoundingly, he wasn't prepared enough to bring slates and the footage was impossible to sync; first documentary jitters, I guess? But I also thought of how Jagger's deep appreciation for black music really is, I think, demonstrably genuine, and the same for the majority of his British Invasion peers whose music (not so much the Stones', but certainly the Beatles' and Kinks') can seem so cerebral, communicates on what you could reasonably classify as a more mundane level. I don't know if that's an inherently lesser accomplishment, but I know it's not a greater one. My teenage self, with no clue about gospel and not that much of one about R&B, and not a trace of understanding for Christianity, probably wouldn't have understood that statement.

What I think is happening here, when people are totally overcome with emotion and just let it happen to them, is something that should happen to us more often, but religion is the only context in which it is entirely socially acceptable, and of course this impulse to let go filtered into the secular and sexual world of rock & roll and R&B starting in the early 1950s. Notwithstanding the pop star at center stage, these are mostly regular people gathering in a hot room doing something that's impossibly important and second-nature to them, and when I say "them" I do not mean it in an "othering" sense, nor do I take the simplistic view that not being religious renders my worldview more scholarly and enlightened -- my point isn't that naivete allows those occupying the pews in this footage to be "free." Rather, I would imagine that among the many people participating in the moment we see preserved here, in time capsule form but eerily present and undiluted, there was a whole range of perspectives and imaginings on God, on the spiritual world, on the specific definitions of those terms, how they manifest in real life and how they form people and are formed by people. What's universal, though, is that they are brought to this place -- whether Franklin is present or not, I imagine in many cases -- by the longing for transcendence, for a moment of real unadulterated joy and power that overcomes the mundane realities of day-to-day life, often a very hard day-to-day life but suppose it's not. I think this is still a human need and I think that so much of the rest of the world we live in seeks to deny it with cruel regularity; and I don't know of any structured manner in which most of us are permitted regular access to be among others and to exude and bask in that kind of joy, apart from church. So it's little wonder that it can communicate so many ruinous things, but it can also be the home to an ecstatic explosion like this, and how can you blame anyone for devoting their lives to that? We find freedom wherever we can; Franklin's face throughout this remarkable performance -- and perhaps especially while her father C.L. Franklin is testifying to her life of worship -- implies her awareness that she is giving as much as receiving it.