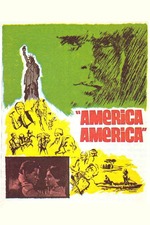 Haskell Wexler's stunning black & white photography is the most obvious virtue of this Elia Kazan passion project -- a three-hour narrative of his uncle's journey to America from his impoverished village in Turkey -- but by no means the only one. While episodic by necessity, the film is frequently absorbing enough in sections to get across a genuine sense of harrowing journey, all driven by Stathis Giallelis' incredibly well-controlled performance as young, determined, struggling Stavros. The best sequence comes early on when Stavros is besieged by an endlessly persistent con man named Abdul (Lou Antonio), whose machinations are both bile-inducing and dreadfully believable; in some ways, the sideline in which Stavros is arranged to marry the rich daughter of a local businessman is nearly as compelling, but it also betrays a certain cruel streak in his character, which does make the entire film more ambiguous -- plenty more sophisticated than On the Waterfront, at least -- while contributing to an unevenness of tone that's exacerbated by the repeated lightweight interludes of the boy's family reading his letters. (It's also somewhat oddly cast; finding actors to play "ugly" characters is always a dubious prospect since there's no way to do it tastefully, and no workable universal standard besides, but Linda Marsh is so attractive in so conventional a fashion that it results in an a distracting disconnect between dialogue and visuals.) The family dynamic exposed therein is fascinatingly vivid, but the way it's finally so irrelevant to the overall arc makes it feel facile while taking up enough time to interfere with the sense of catharsis when Stavros' journey is complete. Otherwise it's more than worth its length, is surely one of Kazan's upper-tier creations, and deserved the Best Picture Oscar in 1963 more than anything else nominated by a mile. 56 years later, it still has depressing relevance to the killing-yourself-to-live nature of life in poverty, and the search for security.