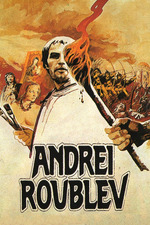 One of those movies that instantly humbles you. In almost twenty years of very nonprofessional writing about film, it's one of those situations (Last Year at Marienbad is another) when something is so singular and overwhelming and gives you so much to contemplate that all you can do is throw up your hands, at least in terms of having any hope to "evaluate" it in words or whatever. And what makes this particular example so striking is that there's no possible way to summarize it that's going to capture the actual experience of watching it. To call it a biopic of a medieval Russian painter of icons, famous for his Trinity, and an "epic" is technically truthful while missing the essence completely. Something I will say is that its three hours seem to soar by without the slightest resistance from even so impatient a viewer as myself. It helps that its eight individual episodes each work as singularly impressive short features all on their own, whether transfixed with spare dialogue and moments between Rublev and other characters, with Tarkovsky's endlessly hypnotic movement of the camera that seems instrinsically tied to our emotional experience of everything we see, or with the genuinely arresting portrait of both the mundane and the extraordinary. There are images, for instance, in the Pagan scene that are quite unlike anything I remember seeing in any other film, and yet cannot be described as surreal or as elevated, only as a slice of unforced poetry.

The best episode is probably the closing chronicle of a bell's casting by what appears to be a charlatan; as so often during the film, Rublev himself -- of whom little is concretely known -- stands at the sidelines of the story primarily functioning as an observer (and thus a kind of audience surrogate) until the final moments of the narrative, when suddenly there is this divinely rendered catharsis that brought tears to my eyes without my even really knowing why, a condition that kept up through the stunning final montage. That's the thing, I can't explain why this struck me in so singular a manner any more than I can explain why Mirror did or why Stalker didn't. And I don't know about my personal connection with it or what it's saying about spirituality or art or whatever else because I'm not in the same universe of knowledge or depth as Tarkovsky. All I know is it is art, and it seems somehow to contain everything.