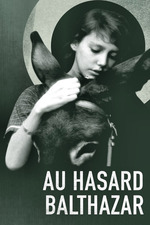 Bresson's work makes a lot more sense when taken as a piece than on the basis of individual films -- without the knowledge of his sense of divinity and grace or his use of actors as (relatively) blank slates that also sit at the center of Pickpocket and A Man Escaped, it would be hard to know how to take this rather barren study of petty and/or violent human squabbles laid against the life and times of a saintly donkey. Bresson talked about having no interest in "knowing" the characters he wrote about, only presenting their foibles without comment; perhaps I'm missing something, but given that said foibles are invented wholecloth by the auteur himself, isn't showing them to us at all itself a variety of comment? Whatever the case, his comprehension of the jazzy hoodlums and proud men who take advantage of Anne Wiazemsky's quietly suffering Marie and the sad-eyed, observant, other cheek-turning Balthazar himself feels limited, with those creations more cartoonishly phony than deliberately vague. And if the thesis is that Balthazar is the sole figure of purity in what's tempting to view as a modernist hellscape creeping (via transistor radios and motorcycles) upon idyllic rural life, that seems awfully cruel to Marie, whose evil transgressions are: uncertainty about committing to a marriage and, uh, being angry about having been raped and abused.

The scenes revolving around Balthazar's own plight are the film's most compelling by far, and its major point of interest -- the human dramas are so muddled as to be nearly incoherent, and considering the film's brevity, they're surprisingly dull thanks to the adamant resistance to developing any vivid personalities or situations within them. The director's religion approaches through Balthazar's ultimate, brief moment of peace among the amusingly encouraging sheep, which feels like very cold comfort; perhaps one must be sympathetic to the view that endless pain leads to holy redemption to draw anything but unspeakable despair from this. Maybe unspeakable despair is indeed the point of the film. Either way, these aren't perspectives on life I find helpful or interesting, and -- for now, at least -- I merely respected A Man Escaped and cared little for Pickpocket or Les Dames du Bois de Boulogne so I guess J. Hoberman can go ahead and write me off as not understanding cinema!!