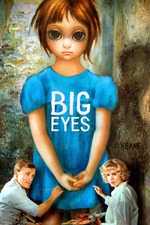 Tim Burton's biopic of kitsch painter Margaret Keane, whose husband Walter got rich taking credit for her work for decades, shares its screenwriting team with Ed Wood and its subject matter and conservative period production design seem like a welcome relief in a decade the director has spent ground up in the Disney CGI machine; unfortunately this is utterly pedestrian treatment of potentially interesting material. Neither Burton nor the Alexander-Karaszewski script can find anything to make this actually passionate and insightful along the lines of their prior collaboration; it's just a perfunctory retelling of events, made worse by its inability to settle on a consistent tone. Marital and interpersonal tragedy collide with broad comedy and misjudged cultural satire; it feels like Seabiscuit tried to go "hip." The most it ever does with the supposedly pivotal art-world debate over Keane's work is have gallery owners and critics show up to thumb their noses at it, and there isn't nearly as much toying around with the aesthetic possibilities as you'd expect for such a visually oriented director. Worst of all is the way that Burton never seems to question the self-conscious 101 structure of the writing, whereby everything is built on the contrivance of Margaret holding her daughter's hand at dramatic life intervals as explained very carefully by Danny Huston in v.o., and we never get much evidence that anyone on or off-screen gave much thought to said daughter's pain in living this lie and under this abuse. Caveat: Amy Adams is wonderful in the lead and almost single-handedly makes it worth watching, though the depth and nuance in her performance cause it to clash badly with Christoph Waltz's dreadful, sitcom-like hamming, which renders the film almost impenetrably loud and unpleasant.

Weird aside: I found myself getting extremely irked when "In My Room" came on for a 1963 period cue and it was a Papa Doo Ron Ron-style soundalike rather than the Beach Boys, then realized something strange was happening when the same thing occurred with James Brown half an hour later. Examining the credits, it looks like the Weinstein Company circa 2015 was too cheap to license actual recordings from either artist and employed in-house musicians to record new antiseptic versions, both "courtesy of" the Weinstein Co. itself. Outside of television, I've never seen this before; just another reason Harvey should be in jail.