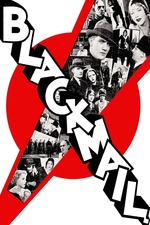 Grade is for the sound version, but tonight I watched the silent Blackmail for the first time thanks to Kino Lorber and I must say that I disagree with the conventional wisdom that it’s markedly superior to the more familiar talkie. It’s still a fascinating film and Anny Ondra’s performance is downright extraordinary; she runs circles around both John Longden and Donald Calthrop as cop boyfriend and homeless blackmailer respectively. But as a silent I don’t think it works quite as well as The Lodger, which was more mysterious and depended far less on dialogue, and it lacks the breathtaking experimentation that gives it the extra boost, for me, into masterpiece territory. The slight variations are all quite interesting for someone who knows the sound version backwards and forwards, but for the most part they’re just that, slight, with the most intriguing differences coming from the relatively mundane matter of framing. It’s a matter of degrees in the sense that the story is still a breathtaking 24-hour whirlwind of trauma, tragedy and intrigue... but I frankly don’t see any reason to watch the silent version instead of the talkie apart from completist impulses. Apparently I’m in an extreme minority, however.

The silent presentation on KL’s disc is stunningly detailed. The sound version looks good too; having come to love this film through a host of crummy VHS-quality transfers, it’s staggering to see it spring to flawless life like this. As when I first saw Criterion’s restoration of The Man Who Knew Too Much, I was nearly brought to tears by the clarity of it.