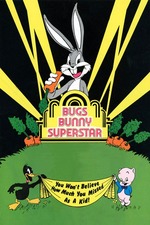 I can't verify in complete honesty that this deserves so high a grade; as you know there are many, many better ways to watch Looney Tunes cartoons, and of the nine included here, only three are what I would call Great (A Wild Hare, Hair-Raising Hare and A Corny Concerto by Avery, Jones, Clampett respectively)... but as far as the scant feature film representations of these characters go, this is the best by some distance; the behind-the-scenes and interview footage is intriguing for an acolyte; and it probably played a large, if unconscious, role in my becoming an enthusiast. Besides, if this grading system is based purely on content, there's no way any movie that includes the Blue Danube sequence in Corny Concerto deserves any less than this. I've seen that a million times but still just stood there awestruck while it played out tonight; it's one of those things that makes modern-day animation look not just limited but downright inane. Full review here for those interested.