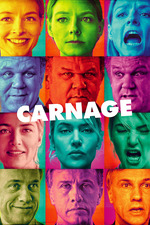 Dull, endlessly talky adaptation of Yasmina Reza's play God of Carnage is a textbook example of what may (or may not, for all I know) work on stage not translating at all to film -- every excuse conjured up for its four characters (Jodie Foster, Kate Winslet, Christoph Waltz and John C. Reilly) to remain in the same place and continue their excruciating argument about one couple's kid beating up another couple's kid renders the whole enterprise increasingly ridiculous and unnatural. (By the halfway point the movie is so shrill it all but begs you to turn it off.) Most of the dialogue is painfully stilted and bears all the marks of the over-rehearsed playing-to-the-wings mannerisms of modern theater; for instance the running gag of Waltz interrupting conversations to answer his cell phone is timed with beat-for-beat perfection with the other characters' activities so that it never once looks or feels like someone actually talking on a phone. (In fact, the first couple of times, I was sure that was the point.) The same goes for various other intrusions, from vomit to overly hysterical laughter, that just underline how far we are from any sense of the way actual human beings, even loathsome ones like these, communicate. Polanski's treatment of the material is shockingly uninspired for a director whose blocking and mise en scene are ordinary close to flawless in even his lesser films (I forgot The Ghost Writer's plot five minutes after it ended, but man it looked great!), and all of the performances are badly pitched and mediocre save Winslet, who gets a couple of OK showcase moments... my favorite being when she takes a quick sip of her drink before continuing to vomit into a mop bucket.