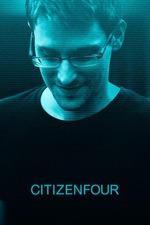 The real-time document of whistleblower Edward Snowden's revelations of incriminating NSA-related documents to journalist Glenn Greenwald, witnessed by filmmaker and writer Laura Poitras, is unexpectedly tense and claustrophobic, with a real sense of danger exacerbated by the obvious nervousness of all involved. It's a rare opportunity to see history actually happening, and even after the bottle is uncorked and we leave the Hong Kong hotel room where most of the conversations have taken place, there is still a sense of unresolved fear that isn't dimmed by the closing reunion. A few years into the balance of power changing in America, we now know the full consequences of programs like these that handed so much unfathomable power to the government, which makes it doubly infuriating when Obama appears in his defensive "so what?" posture. If you're unsure about Snowden or even if you're uncertain about Poitras' own motives even as they grapple with matters none of us especially enjoy thinking about, the care she takes to establish Snowden's frayed human response to the day-by-day uncertainty of the scenario in which he places himself leaves you, if nothing else, with the knowledge that he is acting nobly and fearlessly; and it's this very intimacy that makes the film so remarkable and such a privilege to witness.