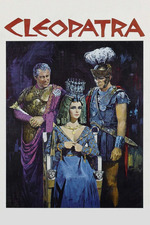 Slight upgrade for camp reasons. You could call it the Married... with Children of historical epics, but that makes it sound more fun than it is -- or rather, more fun than virtually any film could be at 248 minutes (the longest Best Picture nominee of all, though often screened in shorter versions).. Richard Burton, Rex Harrison and (the admittedly gorgeous, and well-costumed) Elizabeth Taylor ham it up like mad and exchange trashy little barbs courtesy of Joseph L. Mankiewicz, who also does a reasonably good job of splashing the Cinemascope frame with enough Griffith-like indulgence that it least makes some degree of sense that the film nearly sent 20th Century Fox into financial ruin. It's all opulence as an end to itself, spectacle as world history and empty philosophy, but its eye-popping excesses in the first half, before it distracts itself with the Antony plot and mires us in endless battle scenes, along with the Hays-defying sexuality, at least make it more entertaining than the balance of gargantuan Hollywood historical epics, though its lack of seriousness and its intense star-fucking are likely the very things that doomed it.

Ben-Hur stands out because of all the burping and the one terrific action scene, Spartacus because of its liberalism and violence, and Cleopatra because of all the damn bitching! All of Caesar and Cleopatra's early scenes together are just a parade of suggestive insults ("I've rubbed you the wrong way" / "I'm not sure I want to be rubbed by you at all"); and the confrontation with a sulking Mark Antony in Egypt late in the film features him all but sarcastically comparing himself to action heroes of the modern screen. See it for the comedy, and for the ridiculously sexy Taylor luxuriating in the magic of pure ego.