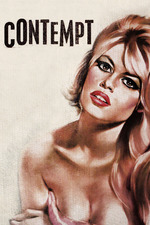 Welcome to Godard-world: the men are arrogant violent shits, the women are beautiful and endlessly put-upon, and the only true force of good is Fritz Lang. Contempt's three clearly divded acts each have their pleasures, agonies and metatextual curiosities, with the midsection in which a marriage crumbles before our eyes in a series of complex long shots, feeling like an art-gallery version of Scenes from a Marriage and/or Marvin Gaye's Here My Dear, simultaneously the most cinematically ingenious and the draggiest. The opening half-hour is a rich accumulation of intrigue -- it underlines Godard's points about cinematic and narrative clarity because you, unlike Paul, can pretty easily spot the moment in Bardot's performance when Camille's heart begins to break, even if we're subsequently led to believe that there is a darker history here than is implied by the scene of postcoital bliss with which we meet her and the shallow, self-absorbed screenwriter Paul; while the finale functions well as both raw and oddly believable comeuppance for Michel Piccoli's compassionless Paul and as sheer L'Avventura-like location porn. The whole thing is structurally fascinating but has enough emotional weight and narrative elegance to be more immediately engaging than the typical Godard "filmic essay." The sickeningly artificial car accident at the end seems superfluous except as a foreshadowing of Pierrot le Fou, but is it even the truth or just a pat fantasy on Paul's part, or even better, an ominous depiction of the most extreme consequences of his aloofness? The thing about Godard is that you're never sure if the things that displease you about one of his movies are frustrating or facile on purpose, which is highly annoying but also sort of admirable; I hate him and I love him.