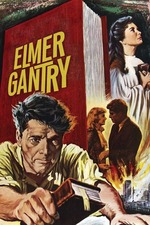 A powerhouse of acting and camerawork, anyway, following with fervor and elasticity the violently animated, electrifying Burt Lancaster -- and, though she has far less screen time, the pivotal Shirley Jones. Sinclair Lewis could never seem to make it to screen intact; one of the best American novelists, his work seems too rich with satire to lend itself conveniently to Hollywood cinema despite its insight into America. The teeth were removed from 'Dodsworth' for William Wyler's film, which became an incredibly moving domestic drama instead -- 'Gantry' retains some of the novel's cynicism and fire, but confines itself to a radically revised rendition of just one chunk of the story. Richard Brooks chooses to investigate Gantry as a complex phenomenon, not so much a symptom of a larger problem; the film isn't nearly as embittered toward religion as the novel, though more sardonic than usual. Only the finale seems an on-the-nose indictment of the values of the film's characters. It's striking, but the more Brooks tries to tell a story rather than investigate a man, the more badly he falters. There's too much chatter and plot and not enough of Lancaster's hypnotic, George S. Patton-like way with crowd (and individual) emotional manipulation. And Brooks' rather one-sided view of the religious masses isn't too much more nuanced than Stanley Kramer's in 'Inherit the Wind' (nor is that shot of the cross on fire near the climax). All the same, when the film is powerful, it's really powerful, and for all of its exhausting and huge crowd scenes and bold moments of polished evangelism, the peak moment is a speech Shirley Jones gives when she talks about the first time Gantry seduced her. It is a moment of raw, powerful sensuality and humor and even, somehow, terror, almost all because of Jones' performance, which seems to cut through everything and operate as a direct communication with the viewer. She, not Arthur Kennedy's tiresome reporter, is the true audience vessel here.

Jean Simmons is spectacular as well, but she gets her best moments in the first half hour, especially that strange subtle turnaround when she is suddenly completely onboard with the cockamamie scheme that leads Gantry into her circle. Christ, it seems, is her drug.

It's fascinating how Brooks uses laughter -- as a sign of cut-through-the-bullshit warmth, as a derisive moment of harsh recognition, as an act of obvious fakery, as a sign of impatience or bewilderment, as a nervous cover-up, as a threat, as a sign of enmity and conspiracy. Laughter serves as the climax or a key moment of nearly every big sequence in the film, and never once is it because something is actually funny. 'Gantry' isn't really about religion. It's about how people lie -- to each other, sure, but especially to themselves.

Would make a hell of a double feature with 'The Master,' with many sequences (and the general story) being surprisingly close in spirit or execution. Would bet a few bucks on PTA having seen this film while he was writing that script.