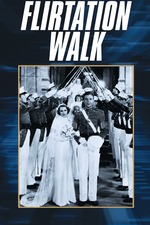 A disjointed mess of a military comedy-musical, kinda, from Frank Borzage, whose considerable talents are of no use here. (It's easy to think of Borzage as a renegade artiste of melodrama, but like so many studio directors of his caliber he spent plenty of time on workmanlike filler like this and the pedestrian Song o' My Heart.) Dick Powell, in over his head, stars as a hotheaded Army private who revels in a rebellious give-and-take with his button-down commanding officer and derails his career after a coitus interruptus episode involving a higher-up's daughter (Ruby Keeler, game but ineffectual); his response to an offhanded insult is to go to West Point to prove his mettle, where he transforms into a stoic asshole. (Judging by this and the nearly concurrent Here Comes the Navy, it seems that enlisting in various forms of military duty as a form of insanely petty revenge was a recurring theme in the popular imagination of the Depression era.) The film then inexplicably turns into a big "put on a show" routine that has Powell and Keeler singing some insipid numbers on the pretense of creating conflict with her would-be husband, all for naught because the latter ultimately closes the whole deal on a handshake for no clear narrative reason. (That's a spoiler, but I really don't want to tag this, and you're probably never going to watch this anyway.)

This seems like a series of disconnected leftover scenes strung together with barely any pretense of a cohesive narrative; I neglected to mention the long, well-choreographed and beautifully lit luau sequence early on, which seems to be the only reason the first third of the film takes place in Hawaii. Powell and Keeler make for a bland couple, and oddly Powell's performance is really hurt by the smarminess he displays here in comparison with his more boyish demeanor in something like Christmas in July, where he's so much more engaging; he also is left at bay by the inconsistent characteriation in the script, which requires him to essentially play a different person in each half of the film. The best you can say about the whole enterprise is that it's very well-photographed (George Barnes is one of the credited cinematographers). As much as we complain about modern Oscar bait, it really is bizarre to see how many films this slight and terminally minor were up for the top prize in the early to mid-'30s.

Borzage's one touch of subversive imagery here comes in a sequence when he literally surrounds a seated Keeler with uniformed men, kind of a lighthearted forecast of the famous elevator shot in The Silence of the Lambs.