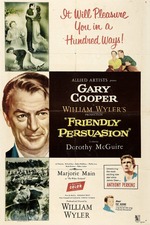 Gorgeously shot drama, with considerable levity, of a Quaker family's plight in Civil War-era Indiana demonstrates that for all his ample talents elsewhere, William Wyler wasn't much of a comedy director. Apart from a run of slapstick gags involving an angry goose (whose performance, whatever machinations it's built from, is quite remarkable), every moment that intends to land humorously is strained and artificial, while the solemn elements for the most part achieve more gravity and emotional connection. The cast is terrific, especially Gary Cooper as the stoic but open-hearted patriarch and Anthony Perkins, phenomenal as the elder son with an urge to fight for the Union whose internal conflict makes itself deeply felt without overstatement or sentimentality. After an episodic, often inconsequential hour-plus (episodes focus on things like a county fair, a mangy horse that secretly runs fast, three sisters who try to seduce Perkins, and the nefarious purchase of an organ), the film's focus sharpens for the last act which is entirely concerned with the Confederate invasion and is masterfully executed until the rather stilted ending. Wyler's respect for and gentle questioning of the characters' faith and its practical place in the world is impressively human and progressive.

Despite only being a mildly notable entry in Wyler's filmography, this is by a longshot the best movie nominated for Best Picture in this year -- the others are not just undeserving but largely outright bad despite the continued cultural omnipresence of three of them, and the worst of all (Around the World in Eighty Days) inexplicably walked home with the statue.

The Docks of New York