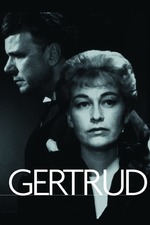 Carl Theodor Dreyer's last film is so very Dreyer, comprised almost entirely of sets of two people -- usually the increasingly resigned Gertrud (Nina Pens Rode) and one of her current or former lovers -- sadly bickering while staring into space facing anything except one another, set against barren whiteness or the occasional idyllic scene of beauty utilized for maximum irony. Dating all the way back to silent films like the lovely Michael, the director's insistence on the urgency of emotional yearning is admirable, though in this case he's working with material (a work of the Swedish playwright Hjalmar Söderberg) that verges on pure soapiness and forces Dreyer's actors into some rather stilted exchanges. Having said that, Dreyer's treatment of the material is fascinating, as if he sees something in it that we simply cannot; every subtle movement of his camera seems to have vast importance to the despairing, intricate narrative of love and disappointment, and the exquisite compositions and washed-out, wistful color experiments manage to overwhelm the apparently purposeful woodenness of the actors, who nevertheless do their best with often painfully long dialogue scenes, many played in impressively lengthy takes -- the best of which features Ebbe Rode very believably breaking down at the end. The sort of arthouse touchstone you can very easily mock, but also a totally convincing expression of a terminally morbid, romantically stunted mood.