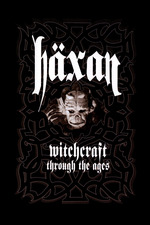 The 76-minute “Witchcraft Through the Ages” re-edit, replacing most of the title cards with William Burroughs’ narration. It still contains most of what makes the original film fascinating and creepy, though of course it amps up the schlock and you do miss the tinting, though the otherworldly sensibility is enhanced some by the damaged film print — some today may find it more effectively haunting than the pristine transfer of the original film, though I suspect that reaction would primarily come from those not especially familiar with this era of filmmaking. For my part I can even imagine preferring this version when I was a teenager and silent cinema was mostly interesting to me as an ancient curio, little suspecting how much emotional depth I would find there one day. I will say that even now I prefer the semi-free jazz score by Jean-Luc Ponty to the painful re-enactment of the original music on the disc arranged by Gillian Anderson... but I generally dislike most scores for silent films quite strongly so that’s not really a meaningful observation.

As to Christensen’s film itself, it’s really something, and not just technically although that understandably dominates a lot of dialogue about it. (The stop motion, the models, the optical effects are all breathtaking.) When you really look at all of the pained, disturbing close ups and consider this came six years ahead of The Passion of Joan of Arc, it’s really quite startling. And there should really be more talk about what a blast it all is, Christensen clearly having a great time in his Satan getup and even the actors often getting a perverse thrill from the enterprise; I’d forgotten the unhinged convent dancing, too, an image worth savoring... though I suppose this is kind of what Criterion was getting at by reissuing the thing in October. While the talk of “hysteria” is uncomfortably dated and seems more antiquated yet when Burroughs says it out loud decades later, it’s nice to see a film that’s less flippant about what a “witch hunt” actually is and more respectful about those killed by them than, I dunno, The Conjuring?