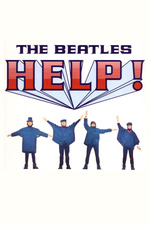 Continuing my probably-unnecessary-but-bite-me-it's-fun refresher of the Beatles cinematic canon.

Was somewhat unprepared for how much fun I was going to have seeing this for the umpteenth time (but first time in quite a few years); as described when I reviewed it at length several years ago, it's a film I had all but memorized in second grade and probably did more than almost any other single piece of entertainment to irrevocably mold my sense of humor, but somehow its surreal dialogue and restless imagination still crackle and blow me away. I don't think it ever really stood out to me how fast it is; I counted 40 jokes (that still landed, at least for me) in the first ten minutes. It shares a lot more with Lester's other Charles Wood collaborations The Knack and How I Won the War than it does with A Hard Day's Night, which is comparatively innocent and celebratory and certainly centered much more on the Beatles as individual personalities. They were stoned and exhausted while making this one and it shows, but somehow in a way that benefits the offbeat, inexplicable narrative -- McCartney mugs, Starkey is strangely subdued, Harrison gets most of the best jokes (including one of my favorite throwaway lines ever, "not a bit like Cagney"), and Lennon's performance is outright demented in an incongruous manner that calls ahead to Crispin Glover in Back to the Future: in the seemingly innocuous context of this goofy caper thriller, he looks and sounds like he is going to murder everyone, and it's wonderful. Wood and Marc Behm's script is poetry (there's some cultural insensitivity, but there are also characters named "Foot" and "Clang" and "Algernon" for absolutely no reason), flailing at the idea of making sense but mostly getting lost in strange word-mazes periodically interrupted by the Beatles miming some tunes (which are, by and large, less inspired than those they offered for the last film, but this too works -- the weak songs don't disrupt the flow of the film at all and Lester has a blast with them, while "You've Got to Hide Your Love Away" and "Help!" are a bit too serious-minded for the lighthearted imagery that accompanies them; "Ticket to Ride" strikes a pleasing balance).

Famously the Beatles (especially John) and most of their biographers have been dismissive of the film, and you can sort of understand, as it really has very little to do with their own work and is more about Lester getting his auteurist jollies in a deceptively mainstream context. Like many of his films from the '60s and again apart from the not-entirely-benign racial condescension, it seems ridiculously forward-looking when seen today: it's filled with what we'd now regard as meta-humor and even anti-humor -- an excruciatingly, hilariously long take of John dialing a telephone; the "intermission"; lines like "stop or I'll shoot, and I am a dead-eye shot, shooting"; the systematic deconstruction of a chase scene courtesy of George meticulously disconnecting a tire; and the priceless moment when Ringo is cornered, out of nowhere, by an escaped tiger in the crawl space under a pub and after it walks on camera an onscreen caption helpfully announces "A TIGER." What's funny is how much of this I just accepted and laughed at endlessly when I was 8 years old. And now, at 36 years old, I wonder where on earth a lot of it came from, what led Wood and Behm and Lester to arrive at many of these bizarre notions, and then I still laugh, and laugh a lot.