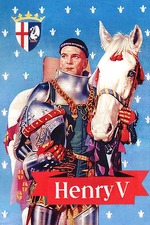 Olivier the director's central conceit (extrapolating from the play's early disclaimer about the absence of scenery) of staging this like a Globe Theatre performance that slowly moves outward with the audience's imaginations into the full visual manifestation of the Hundred Years War at its height is truly ingenious, giving the entire affair a dreamlike, absorbing quality that leads beautifully to the expansive, climactic, immaculately designed battle -- one of the best action scenes I have ever seen in a film. These virtues cannot mask Olivier the actor's shortcomings in the title role, too slight for his own valor except in the usual show-stopping speeches, which are mostly foolproof no matter how allergic you are to nationalism. And the text can't really sustain the excitement achieved during the Agincourt scenes -- not to challenge Shakespeare on story terms, but the courting scenes at the finale are a terrible slog. Still, this is a sumptuous example of three-strip Technicolor and one of the most cinematic films of a Shakespeare work. And Leslie Banks is a delight as the Chorus.