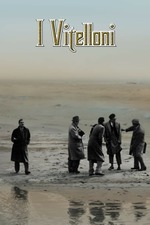 I saw this very early in my classic foreign cinema education when I was about 21, and while I found it enchanting at that point, I think my attraction to it was largely superficial, based on the kind of aesthetic attributes I would then have romanticized -- the exotic nature of it all, the nostalgia and yearning in which its story seems at first glance to be rooted. In fact this is quite an act of anti-nostalgia, even a rejection of the sentimentalism courted by a number of the movies it probably influenced. I found myself frequently thinking of Sergio Leone's Once Upon a Time in America and felt that the puke-yellow sheen through which that film longs for an insincerely mounted childhood was being accidentally rebuked in advance here by Fellini, who was himself guilty of a kind of similar sentimental vagueness in Amarcord; that maudlin wistfulness familiar from a lot of coming-of-age art films is something that gets particularly associated in the popular imagination with Italian cinema thanks to movies like the aforementioned plus Cinema Paradiso. Truthfully, I'd also faintly recalled I Vitelloni as a far more realistic film than it really is, even lumping it in somewhat, and very much inaccurately I now find, with Neorealism. It's actually quite lyrical, but what makes it such a powerful experience -- especially to an older viewer -- is the age of its five central characters, whom I'd remembered as quite young but in fact are in their thirties and have evolved into a slump we'd now recognize as an example of the familiar man-child trope. I did recall Fausto being an asshole but not quite the degree of cruelty in which he partakes, nor the unflinching and unforgiving way in which Fellini depicts it -- this film absolutely doesn't lend dewy-eyed tenderness toward misogyny the way that Once Upon a Time in America ultimately would. I didn't remember the elegance and surprising warmth of his comeuppance. I didn't remember how visually beautiful it was, with multiple sequences and compositions quite stunning, and leaps and bounds ahead of Fellini's prior two efforts in that sense. And I didn't remember how completely devastating the film was at the finale, so simply and effectively so that I just don't think I can go into it in much more depth than this at the moment. I hate to keep bringing up other movies, but once again, I just kept thinking -- George Lucas wished so hard for that moment and completely botched it, because he didn't actually understand why the moment in question needed to happen, why the only alternative was death. This is more than a breakthrough for an important director -- who immediately set forward on a path I find far less compelling in La Strada, which interestingly was written first -- it's genuinely timeless, and peculiarly heartbreaking in its depiction of utter stagnation, and the big questionmark that stands in front of a redemption. Absolutely no way can it speak as much to a young person as it does to someone who's already watched a number of ships sail away.