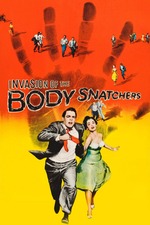 Brilliantly executed and creepily effective horror/sci-fi about a small-town doctor stumbling upon a phenomenon that, initially, can't even be quantified enough to seem improbable but is unmistakble to those who witness it. Like Cat People, this is genre fiction that uses the wildest of fantastic ideas to explore vividly human, deeply uncomfortable emotional issues that resonate almost eerily well now in the midst of COVID, particularly at the moments when Kevin McCarthy's Miles is forced not only to try desperately to convince those around him of what is real but to also care about it. Don Siegel studiously avoids either dull exposition or making things too explicit, though there's plenty of delightful visual audacity to balance what is ultimately a rather serious parable. The sense of realism it achieves really ratchets up the tension and justifies your investment of emotion, which is a big caveat I have with lots of impressively mounted horror movies.

I wasn't quite sure if the ending worked at first, but overall I think its subtler bleakness is quite effective -- the weight of it only falls on you after the fact.

Also a little jarring to watch a film from 1956 in which an unseen, nefarious external force renders your family members impossible to speak to and communicate with, impervious to reason and love; it's like the last two decades of American life distilled into eighty minutes.