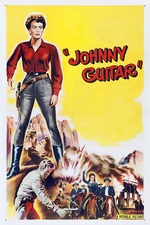 The storyline in this effortlessly modern, progressive-feeling western isn't that far removed from the conventions of the genre, but Nicholas Ray's sublimely serious-minded yet unpretentious execution places it in its own class, as does the extraordinary cast led by Joan Crawford, Mercedes McCambridge and Sterling Hayden, those first two embodying powerful and sophisticated female characters that aren't easily boxed into traditional hero or villain roles. I have to say, I love The Searchers, but it's interesting that it became the '50s western that most often lent itself to freewheeling reinterpretation when it seems it would take less effort to deconstruct and uncover the underlying feminism, sensuality and forward thinking in this film. Ray's taste for melodrama and his willingness to meet his characters on their own terms are an intriguing contrast to the restraint and buried emotion in John Ford's work. Plus it's just riveting all the way through, and feels like it could exist today with few changes in a sense that can't even really be claimed for Howard Hawks' westerns, for instance, as beautiful as those films are. But these are just slapdash thoughts on a movie I really should have seen a long time ago!