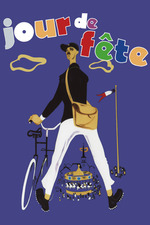 Simultaneously fanciful and totally natural, Jacques Tati's first film is a wonderfully earthy comedy about a small-town celebration in a French village intertwining with the mishaps of a barely-competent, eccentric mailman and his many inept, drunken stunts, which intensify after he's exposed to a hilariously overblown industrial film promoting the agility and physical prowess of American postal workers. It's silly fun, but also quietly lyrical, subtly betraying a sensitivity to which it won't fully confess.

Features some of the best goat acting in cinematic history, Le Quattro Volte be damned.