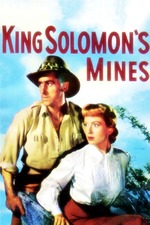 I was very prepared to be infuriated by this when it opened with an elephant being shot (unfortunately for real, though not done by or for the film crew) and settled in for another Trader Horn-like experience of flagrant racist white-man African safari fantasies interrupted occasionally by impressive wildlife footage. That's not far from the reality, actually, but while the story is the usual nonsense, the lead performances by Stewart Granger and Deborah Kerr are above-par, and the MGM production team truly delivered some remarkable images of not just wild animals cavorting gorgeously in the African plains but of genuine indigenous dances and culture seldom captured on film that, to put it bluntly, far outpace the film itself in their power (though far be it from me to make claim that it was ethical for MGM to be the ones to package all this for American consumption). Plus it's consistently exciting even though it's all total bullshit, based on Henry Rider Haggard's novel (with major black roles reduced and a white lady arbitrarily added, naturally), and manages to deliver gripping adventure episodes while looking pretty much flawless thanks to cinematographer Robert Surtees. Problematic as all get-out, no question, but solidly entertaining in its fashion.