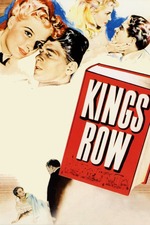 Batshit Warner Bros. soaper is sort of a forerunner to behind-the-curtain suburban dramas on the Peyton Place order, with some of the most lurid (offscreen) happenings in classic Hollywood, lifted from a now-obscure bestseller by Henry Bellamann. It opens with a quintet of heavily emotional children carousing around the "good town" of the title, but Sam Wood (a director, like Clint Eastwood decades hence, whose work's harshly sober brand of Americana seems far removed from his reactionary personal politics) rapidly steers away from the wartime sentimentality of something like The Human Comedy and steeps us in interpersonal hypocrisy and shadiness with a pair of tragedies anchored by the violent actions of insane doctors. No, really. With a wacky star-studded cast, William Cameron Menzies' production design and Bob Burks' photography, Betty Field shrinking away from the camera in a performance that registers full Mary Astor in The Great Lie on the camp scale, a future president's amputated legs, a murder-suicide, aggressive Spellbound-style promotion of the psychiatric field, and a completely unpredictable multi-conflict structure, you can interpret it as terrible kitchen-sink stuff like Anthony Adverse or something (that film sprang into my head because it too prominently features a drawing of the doorstop-sized source novel on its poster) or as a kind of grand Mysteries of Lisbon yarn-spin, and either way you're basically correct.

To my surprise (I guess I never thought about it), this was the first film I've ever seen with a performance by Ronald Reagan, who's basically fine here; his big showstopper moment is when he hilariously screams "Where's the rest of me!?" upon waking up with both legs missing. I don't have a bit of respect for the guy as a politician but I have to hand him massive props for culling that line as the title for one of his memoirs.