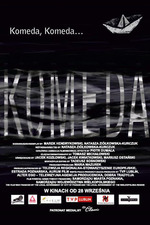 This competent but rudimentary talking-head documentary about the composer Krzysztof Komeda is included on Criterion's release of Rosemary's Baby, and -- shot on video with slightly out-of-place bits of animation -- it feels like a lengthy DVD extra, though it apparently did play a couple of film festivals hence my logging it. You do get a decent snapshot of the Polish jazz scene of the late '50s and early '60s, and some fine clips of work he did with the likes of Wajda and Polanski, but overall there's surprisingly little music, and not much that feels sensory or that makes a strong enough case for its subject, who died very early in his potential second career scoring films. (The sense of place is fairly strong, but there's too much B-roll of city streets and not enough archive footage.) I know it's a bit of an unfair prejudice, but things like this seemed so much more engrossing when they were still shot on film.