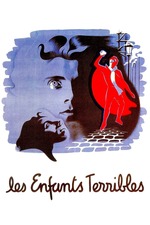 My first Melville -- though I guess it's more like half a Cocteau, and the things I like about it are very much in the vein of his movies. It's an adaptation of Cocteau's influential novel about an unnaturally close and mutually toxic relationship between a brother and sister, one fragile and the other ruthless, and how the various claustrophobic settings in which they find themselves reinforce the increasingly decrepit and codependent nature of their lives together. One of the central performances, Nicole Stéphane's, is hugely magnetic; the other isn't quite so well-defined, which is a general issue with the script despite the very carefully enunciated, detailed voiceover (provided by Cocteau himself). What might have been engagingly mysterious on the page only flirts with the kind of fanciful grace of Cocteau's better cinematic work here because it generally can't graft verbal enigmas onto visual ones. The middle third drags because it's directionless by necessity, and there's only repetition to guide us to the cathartically despairing climax, which is the most enriching and provocative part of the film. It's a fascinating effort -- one of the most vivid examples of a movie that communicates every sordid element of its setting(s) -- but feels incompletely formed.

The Devil Is a Woman