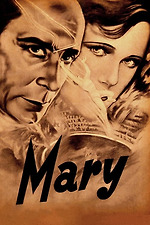 Essentially just a poorly done highlight reel from Murder! in a different language with a different cast, and dispensing with almost everything that makes that film so fascinating. What little remains is rushed through, to the extent I wouldn't be surprised if what currently circulates is severely cut (it was at one point thought to be a lost film). The ending (which matches the friendlier finale of the American version) is particularly half-baked. A one-time curio for Hitchcockian types. The absence of flavor, quirk and genuine experimentation almost totally circumvents the film's appeal. And Alfred Abel makes no sense in this role.

Spoiler (but not enough of a spoiler for me to tag this): whereas in Murder! Handel Fane's ambiguous sexuality is coded as his having "black blood" -- which Hitchcock himself admitted was a dubious way of getting around saying the G-word -- we don't even get that bit of euphemistic dancing here, where it's revealed in the final seconds that Fane is essentially a forerunner to Jimmy Stewart's clown in The Greatest Show on Earth.