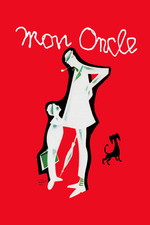 Tati's film grammar is his own; on a surface level, this is funny and clever and warmly naive -- contrasting a young boy's arid home life in a hyper-efficient modern house among his superficial, class-conscious parents with the whimsy he encounters on outings with his uncle M. Hulot in his ramshackle, cheerful neighborhood whose colorful strife sparks so much more play and imagination -- but as a construction, it's exacting and ingenious, a film of theoretically simple pleasures that refuses to allow its audience to rest. So many jokes pay off before they're actually set up, and others are buried in one corner of the screen while three or four other things play out. It's sharp, rather than just innocent, because of the joy it elicits from its own meticulousness, but the finale can only be seen as truly bleak with only a touch of begrudging optimism -- Tati seems to suggest scrappy, joyous culture being totally subsumed, which he would show us directly in Playtime the following decade. But just as in that film, he's more conflicted than he seems at first -- the impersonal, sterile quality of the human interactions in the fancy push-button household is decried at the expense of the celebration of bodily function, clumsiness, ugliness at the heart of Hulot's scenes. But both worlds are markedly beautiful and full of passion and energy, all dramatizing a process of liberation. Hulot is barely a character, more an omniscient representation of unapologetic human frailty, but like so much of Tati's work, the film as a whole is a canvas that reflects as eccentric and singular a vision as any art on this scale possibly could.