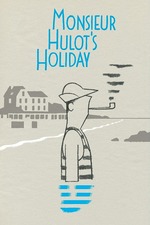 Tati's films are so palpable as experiences and his really is a nearly unique cinematic language, something you can say about barely any other director. One's inability to process them the first time they play through is a feature, not a bug; my flaw is I try to catch the essence of everything that's going on and my eyes try to wander everywhere at once. There is massive pleasure to be found at the intricate visual gags in this -- some subtle, some childlike in their broadness -- but you can assure yourself that you've also missed a great deal. The experience of watching this smaller-scale, black and white production is ultimately not that different from seeing Playtime; in either case, you're immersed in a purely visual realm with words viewed harshly as inadequate, for the dialogue here is even more inconsequential than in Tati's next film Mon Oncle, and the Hulot character's role is really to lend structure to Tati's bemused, pointed but affectionate commentary on Modern Life. Holiday has him placing Hulot on the French coastline where his bumbling and noisemaking wreaks minor havoc among the other tourists. His oblivious sense of peace ought to be an object lesson for the lot of them (he's the only one who seems to be enjoying his vacation). It feels like a long and oddly pleasing dream, one whose real essence comes into question the next morning: what was I saying to myself, really? The feeling it generates of actual interaction with its places and subjects is as ideal an example of pure cinema as one can find; and, like all of Tati's films, it feels like you could immediately replay it and enjoy a totally different experience.