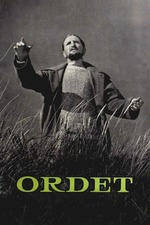 By turns riveting in its claustrophobic intensity and simmering menace, emotionally overwhelming in the purity of its love for its characters and the grief it shares with them, and in the end, staggering in its grace as a cinematic expression of the miraculous. It's a magnificent film about faith because, as Inger surmises at the outset, it posits that faith will come to and rescue those who need it, and it comes about this process not through the factions and discord of organized religion -- mocked at length here -- but through the barer, more honorable paths of love and belief and through the yearnings of the outwardly simple; the depth of belief and gratitude in those stunning final closeups is directly born of the adoration shared among a whole family, but especially that of a loving husband toward his wife. It is also a remarkable instance of audience participation within a two-dimensional work of art, whereby our own desire for death to be conquered by love is achieved seemingly by sheer force of will, but more accurately by a surrendering of control. Like The Passion of Joan of Arc, the film achingly captures glory through visual beauty that is never especially assertive, only quietly impassioned; Dreyer's hand is gentle on our shoulders.

The Blood of a Poet