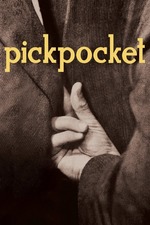 An extremely similar narrative exercise to A Man Escaped, classical crescendos and all: a brilliant formal investigation of the physical act of the title -- with shifting eyes, poker faces, skilled lateral movements, sleight of hand and complete liberation within confined spaces that feels almost erotic -- is made to clash with a Dostoevsky-like spiritual redemption that depends greatly upon the audience's own investment of personal detail since its characters, particularly its gray-rock protagonist played by Martin LaSalle, are blank slates fulfilling what is, visceral economy aside, a rather elementary story. The film's treatment of eventually vital young neighbor Jeanne (Marika Green) is so rudimentary that I find it impossible to be moved by the conclusion, in much the same way that the severity and ideology of Michel's lawless behavior do not strike me as inherently fascinating or enigmatic -- Dolly Scal's brief appearance as Michel's mother is the most appealing human moment of the film and actually seems to hold some mystery within it. When it comes to almost every other human in Bresson's piece, it's not even so much that we're given little information as we're given little reason to believe there's much to know beyond what is explicitly, philosophically, morally laid in front of us. It seems that the final catharsis of it all is lost on me, and again I'm left to wonder if Bresson simply isn't going to speak to me as loudly as to others (this is my third goround).