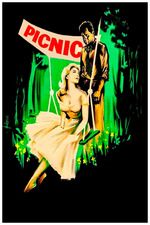 Oscar-nominated theater adaptations like this grew on trees in the 1950s; this one, in which shirtless William Holden comes to a small town and trips everyone up with his hobo ways and (supposedly) crude sexuality, starts out intriguing enough and certainly benefits from its relatively accomplished cast, but when the central event of the Labor Day picnic hits, everything slides downhill fast. Joshua Logan's direction suffers from its very stilted flailing at depicting a down-home Good Time, and then lacks the schlockiness to go full-on Sirk despite its share of fistfights and horny night drives. Holden's good as usual, but his matchup with local starlet Kim Novak rings false, and Rosalind Russell chews everyone up in proto-What Ever Happened to Baby Jane? fashion. While the whole film (and play, presumably) is critical of the idea of women aging out of usefulness, it's also fixated on it in a manner that now feels tiresome, as are many other dramas of the era. Its angst just plays as absurdly elevated at this point, though no doubt some audience members will enjoy that.

James Wong Howe's widescreen photography is a huge asset, but don't depend on Netflix to send it to you on an uncropped disc like I did; I had to resort to the Bezos Empire to see anything past the credits... Also: very important opportunity for a grain silo quadruple feature with Witness, A Quiet Place and A Corner in Wheat.