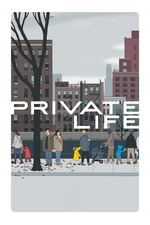 Hooray, the most outlying-among-friends opinion I’ve had since Paterson, and yet again I feel rather guilty for finding this so grating. It’s essentially a film about the two most insufferable people in the world trying to have a child in their forties (finally I understand how all those people felt who hated Frances Ha because they thought Greta Gerwig’s character was intolerable), and notice I didn’t say they “want a child.” Both seem downright ambivalent about it but somehow there’s this underlying sense that it’s something they’re supposed to do, which is a mindset I find more than a little creepy myself!! After about five minutes I genuinely wasn’t sure I was going to be able to put up with Paul Giamatti and Kathryn Hahn’s performances — which are perfectly believable, they’re fine actors, but yeesh — for 2+ hours. The introduction of Molly Shannon, whose character and acting are both pitched very strangely, did not help at all, but luckily the monotony is broken a bit by Kayli Carter and John Carroll Lynch who are both like an oasis in the desert. Lynch is such a full-bodied performer who should be used more, and Carter is an unexpected delight playing a character whose often bewildering actions she sells charmingly.

I can’t explain why this sense of the tiresomeness of the privileged and petty has come up with this film as well as stuff like Mia Hansen-Love’s work or The Razor’s Edge and not so much with Holiday or Noah Baumbach’s films (maybe that Baumbach’s a little more flippant, and he’s also actually funny — I didn’t laugh once during this) but I have considerable trouble relating to people with this degree of blessed aloofness, the kind who have a drag-out fight about second wave feminism based on an offhand joke after finding out about a book jacket they don’t like... I just feel like I’ve seen about a thousand movies about these people and it’s too many, especially when their “problems” are almost entirely self-imposed. It’s a pet peeve of mine when issues and arguments basically feel like invented rather than organic conflict, as though characters are being manipulated in order to have as many problems with basic communication as possible. It’s not all personal bias — the characters are inconsistent, Hahn’s in particular changes her personality completely from scene to scene; and the cyclical structure gives the feeling that nothing about the incident the film spends depicting actually mattered in terms of the heavy and painful discussions it spurred, with no reason given why it’s considered worth it to start all over again — but yeah, a lot of it is that I don’t understand these people. If my opinions mattered I might worry about how much I was basing reviews on who I’d like to have lunch with or whose life choices I agree with; fortunately no one cares!

The ending is a blatant lift from A Separation and exemplifies something else I’m sick of: the inconclusive final shot was once a powerful trope but can we give it a rest please.