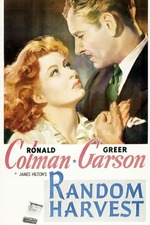 I'm gradually discovering that there's a whole subgenre of Classic Hollywood prestige picture that I never knew existed; broadly, they're soapy and star-studded melodramas based on bestsellers that typically take place over a great number of years (though the performers never seem to age) and have premises and plot turns that are quite simply wild, and end up using their unpredictable kitchen-sink sensibilities to source empty emotional calories so that they don't have to go to the trouble of crafting believable or interesting characters. These are usually fun movies to watch that don't have much artistic merit, one exception I know of being the lovely Smilin' Through (which might not fit since it's based on a play and, however outrageous its story, it has solid characterizations and runs under two hours); otherwise I'm referring to stuff like Anthony Adverse, Kings Row and this particularly nutty romance, the kind of films that usually feature a gigantic hardbound book on the poster so you know that what you're about to see is Based on a Beloved Novel. Films based on good novels tend to suffer enough in the act of dilution from page to screen; films based on what I assume to be populist tearjerkers -- this one by the more-hallowed-than-usual James Hilton, published in the month of the Pearl Harbor attack -- have to squeeze so much story information in that they feel like long trailers, with no time to savor any moment (like a vulgar variant on George Cukor's David Copperfield adaptation).

This good-looking MGM production banks on your attraction to big emotional crescendos with little buildup; set after World War I, it also piggybacks on the semi-coincidental chaos of 1942 for its resonance, the depiction of the end of the previous war suffused with longing. Over a decade and a half we watch as an amnesiac mental patient (Ronald Colman, more or less flaunting his usual persona with a touch later on of persnickety Noel Coward in The Scoundrel) creates a modest new life for himself with a highly nurturing and patient wife (the luminous Greer Garson, the only actor in the film who really gets to demonstrate a higher skill set) only to then, hilariously, suffer yet another concussion and suddenly become his old self, a military officer and corporate magnate whose 15 year-old second cousin wants to fuck him. The rest of the film explores the decade thereafter which has wife #1 back in his orbit as a secretary who's clenching her teeth, perhaps even more improbably, to avoid letting the truth slip out; in the end they're back in each other's arms, for largely unclear reasons but hey, it's the movies. The entertainment value you glean from this will depend on how much you enjoy constantly arching your eyebrow and saying "really?"; it's not as campy as something like The Great Lie, but its story turns are ludicrous in practice -- perhaps they made sense on the page -- even if, via Garson, the film sometimes approaches a sensitivity to what it feels like to lose a lover, either to death or to irrevocable change. I found myself envisioning a Krazy Kat-meets-The Love Boat sitcom in which Colman hits his head and enters a new marriage each week. Think of the potential guest stars!