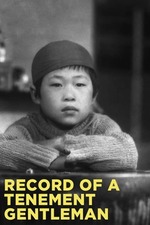 Record of a Tenement Gentleman

Simple, funny, touching (but by no means straightforward) chronicle of a neighborhood of surly adults' response to a war orphan's appearance in their neighborhood, focusing mostly on Chōko Iida as a widow and tinkerer whose open disdain after being stuck taking care of the boy is the uneasy prelude to a reluctant respect and affection. The material could easily become goopy and sentimental; but Ozu's calm, slow approach -- covering an impressive emotional expanse in just 72 minutes -- allows it to come across as real life, subtly encouraging an embrace of the children whose lives were left broken by the war without judging any of its characters for the one-day-at-a-time routines in which they mire themselves. The photography is flawlessly beautiful as always, the humor enjoyably juvenile without being easy or cheap, and the way everything builds up to and fully justifies the climactic moment when Tane breaks down is a perfect example of harrowingly realistic, earned emotion in cinema.

No R1 DVD release to date -- what up with that? Viewable on Filmstruck, anyway. The title is a mistranslation no one's ever bothered to correct; it's meant to refer to a full ensemble comprising a block of homes, not to a nonexistent "gentleman."

The Guns of Navarone