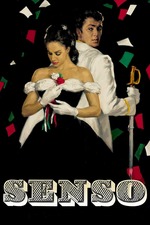 Visconti's distractingly gorgeous Technicolor effort at a Madame de...-like story of the fractured heart of a noblewoman is, thus far, the most I've warmed to his work -- maybe because its concerns of sexual liberation and self-torture are of personal interest to me!* Alida Valli leans fully into the unpolished melodrama of her role as an Italian countess with Nationalist sympathies and a cousin in the rebellion, who falls in love with a cad among the occupying Austraian army, a rather miscast and surprisingly unrecognizable Farley Granger. Only his smirk seems inherited from his other performances, and it's an odd choice since his boyish naivete might have helped the story out of its hole of coming off as terribly obvious in its direction from the earliest scenes; Granger makes his character's manipulative nature so explicit and unmissable that it's difficult to sympathize with either character or feel much investment in their carnal relations. Nevertheless, the film is so full of striking and even breathtaking images that it nearly fills in the difference of its own dramatic shortcomics via pure aesthetic ecstasy. With better casting, however, it might well have been truly extraordinary, as Visconti himself suspected: he wanted Brando and Bergman!

* This doesn't explain why Ossessione left me relatively cold. I now feel a great need to revisit that film; I'm more confident about my original responses to La Terra Trema, which coalesces with more generalized issues I have with Neorealism; and The Leopard, which I did not like at all.