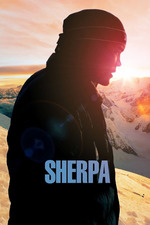 Anyone who's read Jon Krakauer's harrowing Into Thin Air will be aware of the precariousness and treachery of the Mount Everest climbing industry, which has only grown since then as a status symbol for a certain bougie variety of daredevil tourist. Meanwhile, the impact of climate change on the mountain has made the trip ever more dangerous. One thing Krakauer didn't really touch on was the racial divide that becomes evident in the expectation of the Sherpas around Nepal not only to do most of the hard labor involved in facilitating a climb but to present a cheerfully subservient attitude the entire time. These issues are Australian documentarian Jennifer Peedom's primary focus; expecting to make a film about how a Sherpa who's a veteran climber (Phurba Tashi, who has summited Everest 21 times) and his family feel about his work, she ended up inadvertently capturing the aftermath of one of a run of tragedies that have now become a regular event on Everest, an avalanche over a treacherous iceflow that killed sixteen Sherpas. But the most remarkable element of her footage is how completely the European and American climbers depicted match every stereotype you could possibly have of what kind of people spend $75,000 to climb a mountain to impart a "legacy" of simply having done so to their children. At one point, when a phony story about "radical" Sherpas threatening to break people's legs emerges, one of the Americans compares it to 9/11 with no apparent irony. It's the biggest bunch of oblivious dumbasses in screen history. In the end, Peedom's film is about dignity and labor rights, and she manages to catch negotiations in progress and how the pleas of workers fall on the deaf ears of the rich and powerful. It has very little to do with Everest and has everything to do with race and class... but what doesn't?