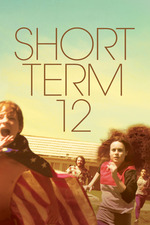 Parts of this surprisingly warm drama about the staff and occupants of a group home for teens have the ring of painful honesty, not only in its portrayal of the inner worlds of the adolescent characters (especially Lakeith Stanfield's Marcus and Kaitlyn Dever's Jayden) but in that of the supervisor played by Brie Larson and her slightly troubled yet promising romantic relationship with a coworker (John Gallagher Jr.). Writer-director Destin Daniel Cretton is a little too preoccupied with the latter at the expense of the former, which forces him into some hackneyed dialogue scenes and at least one truly ridiculous plot point -- but it's hard to object too much to a film that probes mental health and abuse in an honest manner yet remains ultimately winning and even optimistic.

Gotta say: Larson, whose presence I've not much cared for in her subsequent work, is utterly fucking extraordinary in this -- like every expression believable, a presence that feels full-bodied and like an actual human being, completely latching on to whatever rudimentary traits are written into the script and making them organic and vivid. More than anything I can't think of a performance that has captured the on-a-dime compartmentalization necessary for so much of adult life so movingly and believably while embodying very palpably the same character throughout. (To see what I mean you can compare this to something like Olivia de Havilland in The Heiress -- a brilliant, all-timer performance, but one in which de Havilland essentially protrays two distinct people and gives two different performances.) She truly blew me away, far more than in her Oscar-winning turn in the much less nuanced Room, and it's her work here that is going to keep coming back to me. I wish that the film had just ditched the love interest and its... consequences (though there is a major payoff in one line delivered by another character that I would guess is the whole reason all that made it to final draft), even though the specific tenor of the rather on-the-nose arguments at the climax were familiar enough that I probably related most of all to Gallagher's hipster boyfriend character, which is scary because I really found him tiresome in every way, which made me realize how tiresome I can sometimes be, which... well, let's not go there, this isn't therapy.

Your dedicated amateur film critic has just finally seen the movie that launched the careers of multiple young actors including two Oscar winners and dominated several avenues of discourse upon its release six years ago. It's followed me on to-watch lists across multiple streaming services almost since release. It is already unmistakably a stylistic relic in many ways -- mostly visible in Gallagher's aesthetic and attitude, overrepresented on camera. I really need to speed up on this stuff.